Home > Blog > Traffic fatalities have gone down -- So why are pedestrian deaths increasing?

Traffic fatalities have gone down -- So why are pedestrian deaths increasing? 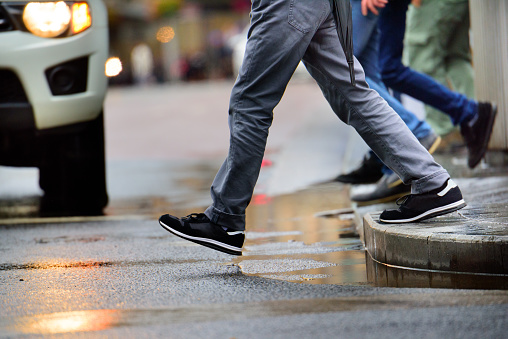 Getting around on foot has never been as dangerous as it is today. At the rate we are currently going, it may only get worse before we begin to see improvements. According to the Governors Highway Safety Association (GHSA), the United States has seen a 35 percent increase in pedestrian fatalities over the course of one decade — from 4,414 in 2008 to 6,227 in 2018. The tradeoff: reduced traffic fatalities involving cars.

In 2018, Alabama ranked as the 8th deadliest state in the nation for pedestrians, according to an annual report released by the GHSA. Based on preliminary data, from January to June of 2017, nearly 60 pedestrian deaths occurred on Alabama roads — a fatality rate of 1.21 deaths per 100,000 people.

If you purchase a new car, it will likely come standard with advanced driver-assistance system (ADAS) technology. These systems can alert drivers of an imminent collision risk, help prevent lane departure, help maintain safe following distance, and even apply the brakes when needed. In addition, the addition of side airbags and improved front-end collision absorption has helped increase the likelihood of surviving a crash.

Yet not enough attention has been paid to pedestrian safety. Unlike vehicle occupants, pedestrians aren't protected by seatbelts, airbags, or advanced safety technology. You don't really see pedestrians wearing helmets or other protective gear like you see with bicyclists and motorcyclists. Therefore, pedestrians are the most vulnerable road users and most susceptible to fatal injuries.

Factors that play a role in pedestrian deaths

What's causing the alarming rise in pedestrian deaths? According to safety advocates, there are several factors that come into play. These are the leading ones:

If you were struck by a negligent driver while walking in Alabama, you likely sustained serious injuries: broken bones, head trauma, or spinal injuries. Needed medical care, X-rays, pain medication, and even surgery, will likely result in a pile of medical bills. Furthermore, you may have to undergo months of physical therapy while you're unable to attend work.

You shouldn't have to pay a dime out of your own pocket because of someone else's negligent behavior. That's why the attorneys at Shuttlesworth Law Firm LLC, based in Birmingham, would like to help you. We help injured pedestrians across the state of Alabama maximize their compensation to cover medical expenses, lost wages, and non-economic damages such as pain and suffering.

To get started on your claim, contact us online and schedule your free case evaluation with our legal team.