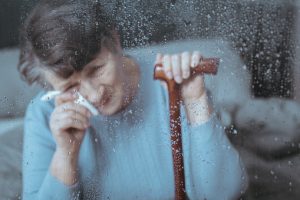 As Thanksgiving and other winter holidays approach, many people will be visiting friends and loved ones in nursing homes and care facilities. Unfortunately, some of the residents awaiting visits from family members may be coping with a terrible secret: Elder abuse.

According to ABC News, abuse of elderly residents may be going on at as many as one out of every three nursing facilities.

A nursing home abuse lawyer knows seniors are often afraid to speak out about abuse because they are worried about retaliation. They may also fear they are at fault or don't think they will be believed. In some cases, seniors suffering from dementia and other health problems are physically unable to speak out. This can leave vulnerable adults in a terrible position.

Those who visit seniors in nursing homes may be the best lifeline to protecting elderly people from abusive behavior. If you are making a visit this holiday season, it is imperative that you carefully observe the senior you love for any signs that something is wrong.

The House Government Reform Committee's special investigations division found around 30 percent of all nursing homes within the U.S. had been cited for abuse. Around 9,000 instances of abuse occurred over a two-year period at 5,283 different facilities. The abuse was serious enough to cause actual harm or to place the resident in immediate danger of injury or death in a total of 1,601 of the abuse cases. In some particularly egregious examples, nursing home residents suffered broken bones, sexual assault and other intentionally abusive treatment.

Abuse can take the form of physical harm, such as hitting, burning, pushing or kicking. Abuse can also involve neglectful behavior, such as a senior who is not moved in bed and develops bedsores or who is not helped to eat or drink and who becomes dehydrated or malnourished.

Family members should look carefully for signs of abuse when they visit over the holidays including:

These are just some of many different signs that a nursing home is not fulfilling its basic obligation and providing an acceptable level of care for a senior.