Nursing Home Neglect Can Lead to Falls for Birmingham Seniors 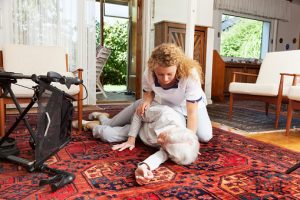 After being admitted to a nursing home facility in April of 2014, a 79-year-old man sustained three separate fall injuries. His guardians believe that the nursing home is to blame for the falls, which have had a serious impact on the elderly man's health.

According to Cook County Record, the man's guardians have filed a nursing home neglect lawsuit. The guardians allege the nursing home knew, or should have known, the man was prone to falls and the home should have taken more appropriate steps to prevent the accidents.

This patient is one of many seniors who experiences fall-related injuries each year. As seniors age, both physical and mental decline make them more prone not just to slips and trips but also to falling out of bed or falling from chairs.

It is part of the job of nursing home staff to reduce the risk of falls as much as possible, to conduct accurate assessments of each patient's ability, and to take steps to reduce the risk a patient will be hurt if a fall happens. Unfortunately, overworked and under-trained staff may sometimes be negligent in their duties to prevent falls and patients can suffer serious harm as a result of this nursing home abuse.

Falls are a Leading Cause of Injury to Vulnerable Seniors

In the case of the man whose guardians are suing his nursing home, there were injuries suffered in each of the three falls his guardians became aware of.

Damages of more than $50,000 are sought to cover medical bills, mental suffering, and physical suffering resulting from the falls.

This man was like many seniors who suffered head injuries and fractures after a fall. Centers for Disease Control and Prevention indicate there are 2.5 million seniors treated in hospital emergency rooms for falls each year and more than 700,000 will be admitted and need inpatient treatment. One in five falls among seniors causes a head injury or broken bones, and falls are the leading cause of traumatic brain injury among seniors.

Seniors are more likely to fall due to weakness in the lower body, walking and balancing problems, vitamin D deficiencies, vision impairment, poor quality footwear, and use of medicines with a sedative or tranquilizing effect. Nursing homes should be aware of which patients are prone to falling and extra precaution should be taken to provide adequate supervision and appropriate safety conditions.

When a fall does happen, especially if head injuries occur, the senior should be provided with prompt medical attention in order to reduce the risk of health complications associated with the injury. A failure to either prevent or treat falls can constitute a dangerous form of nursing home neglect.