When a nursing home resident is hurt or dies as a result of the neglect or abuse of facility staffers, administrators should be held accountable. The resident or their surviving family members deserve to have their day in court when disputes arise. 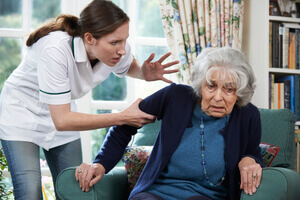 Unfortunately, this is not happening for many people who suffer harm due to the negligence and wrongful acts of nursing homes.

An arbitration clause is a provision that says a person cannot bring a civil lawsuit in court. The clause mandates that all disputes- including personal injury or wrongful death claims- must be resolved by an arbitrator. The arbitration process is typically secretive, which helps to protect the nursing home from potential bad publicity. In some cases, the victims of abuse or neglect who wish to bring claims in arbitration will end up having to pay a portion of the arbitrator's fees. Some evidence also suggest that the outcomes of arbitration proceedings aren't as favorable to abuse victims because they end up with smaller amounts of compensation or are compensated in fewer circumstances.

Often, when someone signs an arbitration clause, the document is buried in nursing home admissions paperwork. People don't understand what they are signing or how the clause will affect their future rights. Sometimes, it is the resident himself who signs the arbitration clause. In other circumstances, it is a person who has power-of-attorney (usually a spouse or adult child). An agent has the right to act on behalf of a resident who cannot manage his or her own affairs.

The case before the U.S. Supreme Court, Kindred Nursing Centers v. Clark, specifically addresses situations where a person with power of attorney signs a nursing home admissions clause. There are actually three consolidated cases that the court will be considering, all of which involved the wrongful death of a nursing home resident.

The Supreme Court in Kentucky found for the plaintiffs and ruled an arbitration clause wouldn't be binding when an agent had signed it on behalf of a resident, because the power of attorney didn't specifically give the agent the right to waive the rights of the resident to a civil trial.

If the Supreme Court sides with the Kentucky high court's decision, this could have nationwide implications that affect the rights of seniors and their families in profound ways.

Many nursing home admissions contacts are signed by agents/ those with power of attorney because those being admitted often cannot act on their own. This case could mean that the residents' right to sue would be protected, even if an agent happened to sign an arbitration clause when the resident moved into a home.