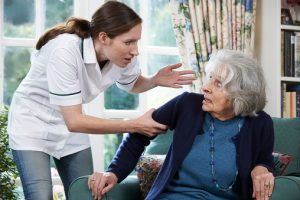 Nursing homes should provide a safe place for seniors to live out their golden years. Sadly, recent reports suggest  there is far too much violence and bullying within senior care facilities.

A nursing home abuse lawyer knows these facilities have a basic obligation to take care of residents and ensure they are not harmed. When a nursing home fails to live up to its duty, the center can be held accountable for any resulting injuries.

According to Common Health, a recent study presented at the annual meeting of the Gerontological Society of America revealed as many as one 1 out of every 5 people in nursing homes studied was involved in at least one "negative and aggressive encounter" over a four-week period of time.

These encounters did not necessarily occur at hands of staff members. Instead, many nursing home residents were being subjected to abuse and bullying by their fellow seniors who were living in the nursing home with them.

One senior, for example, reported having to cope with repeated advances by a man in her nursing facility. She is disabled and relies on a wheelchair and found it difficult to escape the man's advances and be left alone. In fact, in some cases, she was forced to strike the man with her reaching aid simply to get him to go away.

This type of incident is not isolated. Researchers examined patient records at 10 different nursing homes, interviewing both staff and residents. The study authors also directly observed more than 2,000 residents. They found that 16 percent were involved in incidents of screaming, yelling or cursing. Six percent engaged in physical violence, such as biting or hitting. One percent engaged in sexual acts like exposing themselves, propositioning other residents for sex and touching other residents. Finally, 10.5 percent engaged in other type of bullying or inappropriate behavior, such as entering other senior's rooms without permission or going through other people's belongings.

Resident-on-resident aggression tends to receive less attention and publicity than abuse committed by nursing home staff members. However, it can be just as serious. Even when abuse doesn't involve a staffer, the center can still be held responsible, as it has a duty to ensure residents are protected. Often, this type of aggression is indicative of systematic problems within the facility.

For example, the more crowded the nursing facility, the higher the rates of residents being mistreated. Under-staffing of nursing homes also contributed to resident-on-resident aggression, as did nursing home workers who were blind to the abuses occurring within their walls. Because conflicts and negative behaviors tend to spread as residents see others engaging in abusive behavior or being bullied, an atmosphere of abuse can only make the situation worse.

When a nursing home allows unsafe conditions to result in residents bullying or injuring each other, the home itself may be held responsible for the consequences of its failures to create a safe space for seniors.