Alzheimer’s Patients May be Most Vulnerable to Nursing Home Abuse 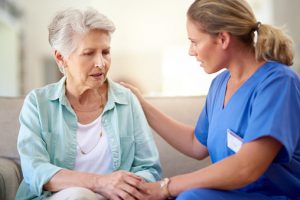 Nursing home and assisted living facility residents in Birmingham, the suburbs of Homewood, Mountain Brook and Vestavia Hills and surrounding locations are all potentially at risk of becoming victims of nursing home abuse. Some patients, however, are more vulnerable than others. A nursing home abuse attorney knows that patients who cannot speak up for themselves or whose memories cannot be trusted are some of the patients at the highest risk of suffering abuse.

Nursing home care for someone with Alzheimer's costs an estimated $80,000 per year, or more. The need for care can last for a decade or longer depending upon the age at which someone is diagnosed with this condition and the age at which the person's health deteriorates. Many Alzheimer's patients will eventually need to live in specialty facilities that provide care to people with memory impairments because these patients need to be in a locked environment and treated by medical professionals familiar with their special needs.

Even being in a costly nursing home is no guarantee that an Alzheimer's patient is going to receive an acceptable standard of care or be free from abuse. The National Center on Elder Abuse reports that 5.1 million Americans aged 65 and up have some type of dementia. More than half of all Americans who are 85 and older have dementia, and the number of patients with this condition is expected to grow significantly by 2030. By 2030, a estimated 7.7 million people will have Alzheimer's disease in the United States.

With more patients requiring care, facilities catering to people with dementia may suffer from understaffing that can lead to neglect and staff frustration. Seniors with dementia may not be able to control their behavior and may act out in violent ways or call staff members names. They are also largely dependent upon staff members to provide assistance with many routine daily activities. All of this can result in frustration among staff members, especially those who are not properly trained. This can lead to physical or emotional abuse or to the unlawful use of chemical restrains (antipsychotic drugs) in order to make patients easier to control.

The National Center on Elder Abuse indicates that close to 50 percent of people who have dementia have experienced some kind of abuse. Another 14 percent of caregivers admitted to neglecting patients.

Recognizing the special risks associated with the abuse of dementia patients is important as those who have family members suffering from Alzheimer's need to carefully research nursing homes to find the best and most supportive environment.